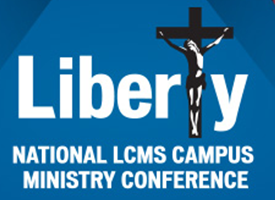 “Liberty,” the 2017 National LCMS Campus Ministry Conference, is planned for Jan. 4-6, 2017, in College Park, Md. The event for college students and campus-ministry workers will take place on the campus of the University of Maryland, which is about a 30-minute drive from downtown Washington, D.C.

“Liberty” will be the much-anticipated third LCMS U Conference following “Unwrapped” in 2013 and “Taboo” in 2015, when students focused on apologetics and marriage/sexuality issues, respectively. Both previous conferences were held at Saint Louis University and were attended by an average of 450 college students and campus-ministry workers.

“Liberty” will provide a forum to not only explore the biblical themes of our freedom in Christ but also address fundamental issues related to religious liberty, the First Amendment and cultivating the vocation of Christian citizenship on campus. It will encourage and equip our college students not only in their faith, but also as they live, move and have their being on the front lines of religious-liberty issues that seem to be multiplying each day.

There will be many sectionals on a variety of topics that will be announced at a later time, but we are pleased to have the following serving as key speakers at “Liberty”:

The Rev. Dr. Daniel Gard is the president of Concordia University Chicago, River Forest, Ill. He previously served as professor of Exegetical Theology at Concordia Theological Seminary, Fort Wayne, Ind. Nominated by U.S. President Barack Obama in 2013, Gard serves as Rear Admiral (Lower Half) and was appointed to the position of Deputy Chief of Chaplains for Reserve Matters in the U.S. Navy. In these roles, Gard is responsible for overseeing military chaplain operations in Navy, Marine and Coast Guard Reserve units around the world.

Tim Goeglein is vice-president for External Relations at Focus on the Family in Washington, D.C. He worked as special assistant to President George W. Bush, where he was deputy director of the White House Office of Public Liaison from 2001-2008. Goeglein also is the author of the political memoir The Man in the Middle: Faith and Politics in the George W. Bush Era, and he serves on the Sanctity of Life Commission for the LCMS.

The Rev. Dr. Matthew C. Harrison is the 13th president of the LCMS, serving as the church’s chief ecclesiastical officer. He served as executive director of the church’s former World Relief and Human Care ministry and as a pastor in Iowa and Indiana. He is a well-known author, editor and translator. He also serves as assistant pastor at Village Lutheran Church in Ladue, Mo.

Mark Hemingway is a senior writer for The Weekly Standard. He has written for The Wall Street Journal, MTV.com, Reason and numerous other publications. Prior to joining The Weekly Standard, he worked at The Washington Examiner, National Review, Market News International and USA Today. He has appeared on C-Span’s “Washington Journal,” CNN, MSNBC, Fox News and National Public Radio’s “All Things Considered.” He was the recipient of a Gold Award journalism fellowship from the Phillips Foundation in 2003 and was a Global Prosperity Initiative fellow at the Mercatus Center at George Mason University in 2003 and 2004.

Mollie Ziegler Hemingway is a senior editor at The Federalist. During her long career as a journalist, her work has appeared in The Wall Street Journal, USA Today, the Los Angeles Times, The Guardian, The Washington Post, CNN, National Review, GetReligion, Ricochet, Christianity Today, Federal Times, Radio & Records and elsewhere. Her work exposing the media silence regarding abortion physician Kermit Gosnell was noted on Fox News and in The New York Times, USA Today and various other outlets.

The conference will take place primarily at the STAMP Student Union at the University of Maryland, with chapel services at Memorial Chapel. An excursion is being planned into D.C. during the conference. The conference hotel will be the Hyatt Place Washington DC/US Capitol, 33 New York Ave., Washington, D.C. 20002.

The conference hotel is a mile or less from most main D.C. sites and, most importantly, only 1-1/2 blocks from the main Metro line. The Metro line also is only one stop from the heart of D.C., which is convenient for getting to the three D.C. airports, the University of Maryland and into D.C. itself.

The basic $270 per-person registration fee includes everything related to the conference program, including breakfasts, lunch on Jan. 4 and three nights at the conference hotel Jan. 3-5 (based on quad occupancy). As was the case at “Taboo,” tiered rates for those who would prefer other occupancy arrangements will be provided on the registration page.